Every year we take a trip to a location at least one of us hasn’t been to before, so this year was a new experience for me at one of my husband, Tre’s, favorite places. Last month, we celebrated our fifth anniversary with a trip to Zion National Park.

We hiked one of the most famous trails, Angels Landing, on Friday. It’s listed as a “strenuous” hike with a 1,500 foot elevation gain over the 5.2 miles. I felt every single one of those feet hiking up the switchbacks to the top of the mountain. Tre kept lying…I mean telling…me that we were almost there. Halfway there. So, so close.

Once we got to the top of the switchbacks the real fun began. You think you’re done. You begin to cheer inwardly. Relief washes over you until wait…this isn’t it. You’re about halfway there. *tears* Apparently the amazing view isn’t enough.

The next part of the path is along the edge of a sheer cliff.

A friendly sign greets you at the point of beginning the insane section of the trail. Since 2004, 6 people have died.

People turned away. One woman said she hadn’t called her husband before the climb. She wasn’t willing to die without saying goodbye. She headed back to safety.

I’ll be honest, the way UP the trail to the summit was my favorite part. I wasn’t afraid of the height. There’s really only one short section where there’s nothing on either side. I passed through without much thought. At one point I was using my arms and legs to slide between two boulders and yelled, “I’m the American Ninja Warrior!”

There were a few points I thought I might not make it to the top. My legs gave out completely at one point and I fell on my butt. It was exhausting. I was pushed to my limit. But I did it!

The view from the real end was amazing. A 360 degree view of the beautiful park.

The way down was a new form of torture. My body was so tense on the climb down to the switchbacks (the fear of death was stronger going downhill). We ran out of water at the top, as well. Plus, the midday sun was beating down on us. At one point, I thought I was going to have a full-fledge panic attack and die on the side of the mountain. The reports of emergency teams saving hikers in the helicopters came into my mind. I was going to be one of them.

I asked people we passed how much longer to the halfway point. One man told me about ten minutes and I almost sat down next to him and prepared myself to give up the ghost.

Somehow, someway we made it back to the trailhead. I really think my brain repressed the way down. I was sore, sunburnt, and so bloody tired.

Now, a few days have passed and I’m ready to go back and conquer it again. 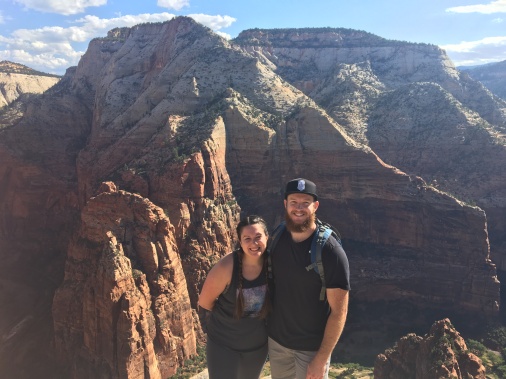 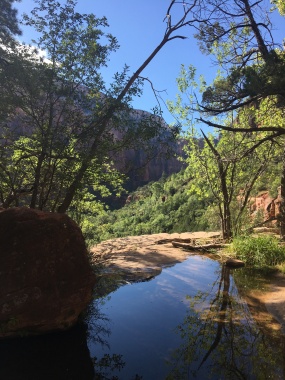 View all posts by brittneymulliner