These past few months has been busy! My third novel was release, I said ‘the end’ on my fifth novel, and my publisher accepted the rest of the Begin Again series!

Finding My Charming is my third baby to hit the market. This book has been through a lot! It started out as a (light) paranormal romance, but through edits and rewrites became the contemporary romance it is now. I love this book. I had so much fun writing it and I’m beyond excited it’s finally out for you guys! 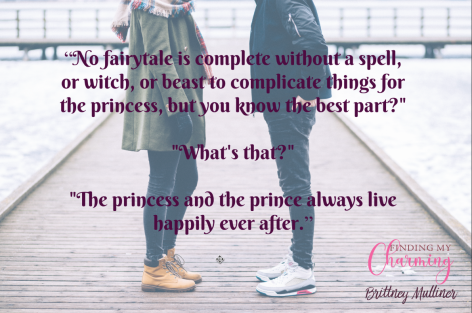 I’ve learned a long, slow lesson about the publishing world. Nothing happens fast.

Well, I may rush to finish a book or edits by a certain date, but it’s more of a hurry up and wait kind of thing.

I started writing Finding My Charming (it’s first name was Uncharming) at the end of 2015. I finished in May of 2016. I did my rewrites gradually, but I’ve been sitting on this book for over a year! I HATED it. I wanted it out! I wanted you guys to read it and love it as much as I do.

But alas, the publishing world is forcing me to learn to be patient. It all worked out the way it was meant to be in the end and I’m in love with how it turned out, but boy, the road to get here has ben LONG and winding.

Next, I finished my fifth book! WHAT!? Book 5 felt so far away just two years ago, but it’s already here and past!

Book 5 is Love  Again, book 3 in the Begin Again Series.

I started Love Again just after I finished Live Again (book 2) but things kept coming up. I swear there was some outside force trying to prevent me from ever finishing. But I did. So HA!

Love Again is different because it’s not from Aubrey’s point of view. This is Mckayla’s story. Don’t worry, Aubrey is very involved and several characters are included. I’m really pleased with how it turned out and can’t wait to get it out, but that will be a little while because….

My publisher, Blue Tulip, has accepted the rest of the Begin Again Series! We’re going to do a revamp on Live Again. Get her a new cover and run through some edits, then we’ll relaunch.

So, once that’s done Love Again will get the attention this book deserves. My goal was to get Love Again out by the end of this year, but with the publisher jumping on it will probably be more toward the beginning of next year. I promise the wait will be worth it!

Until then, keep reading my friends.

View all posts by brittneymulliner